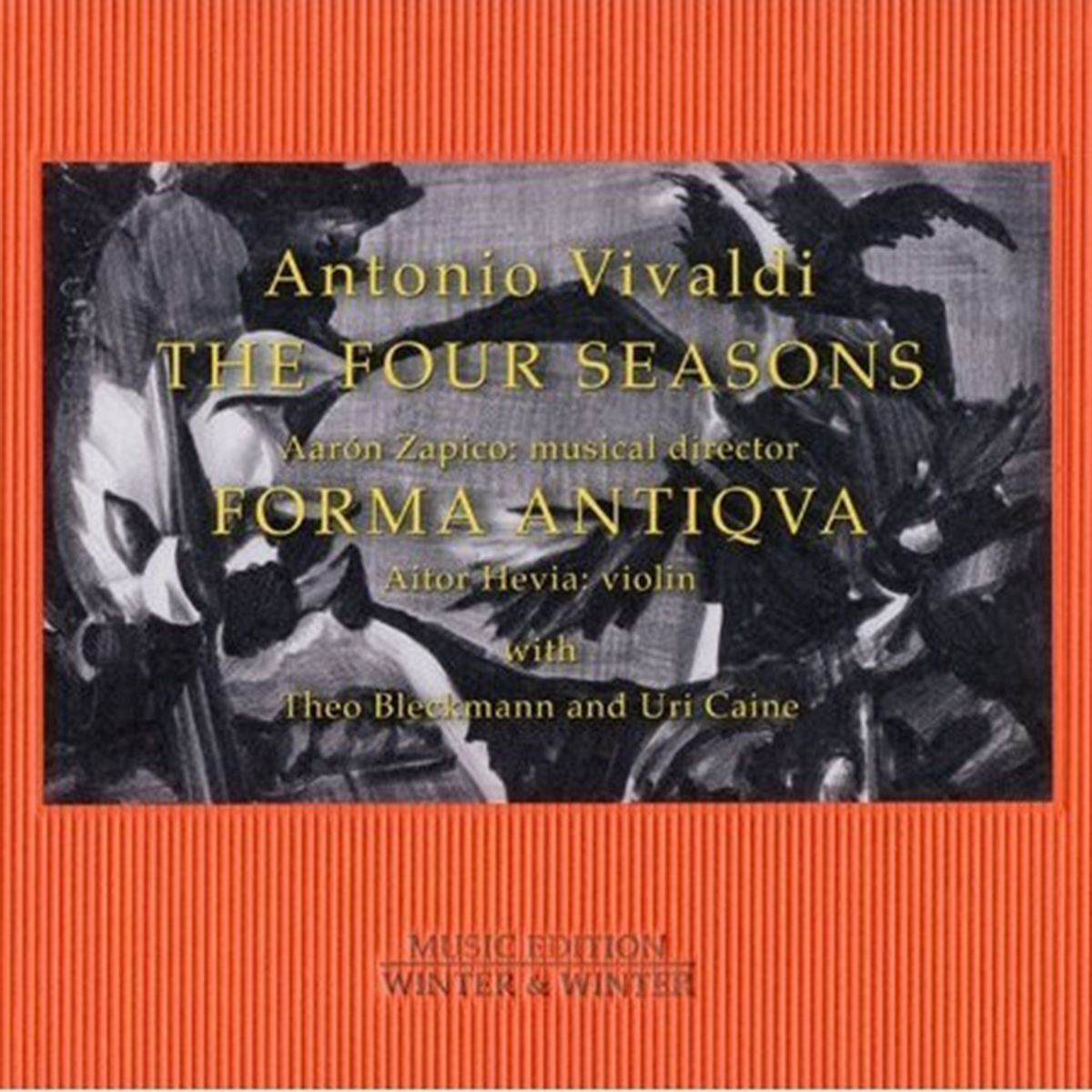 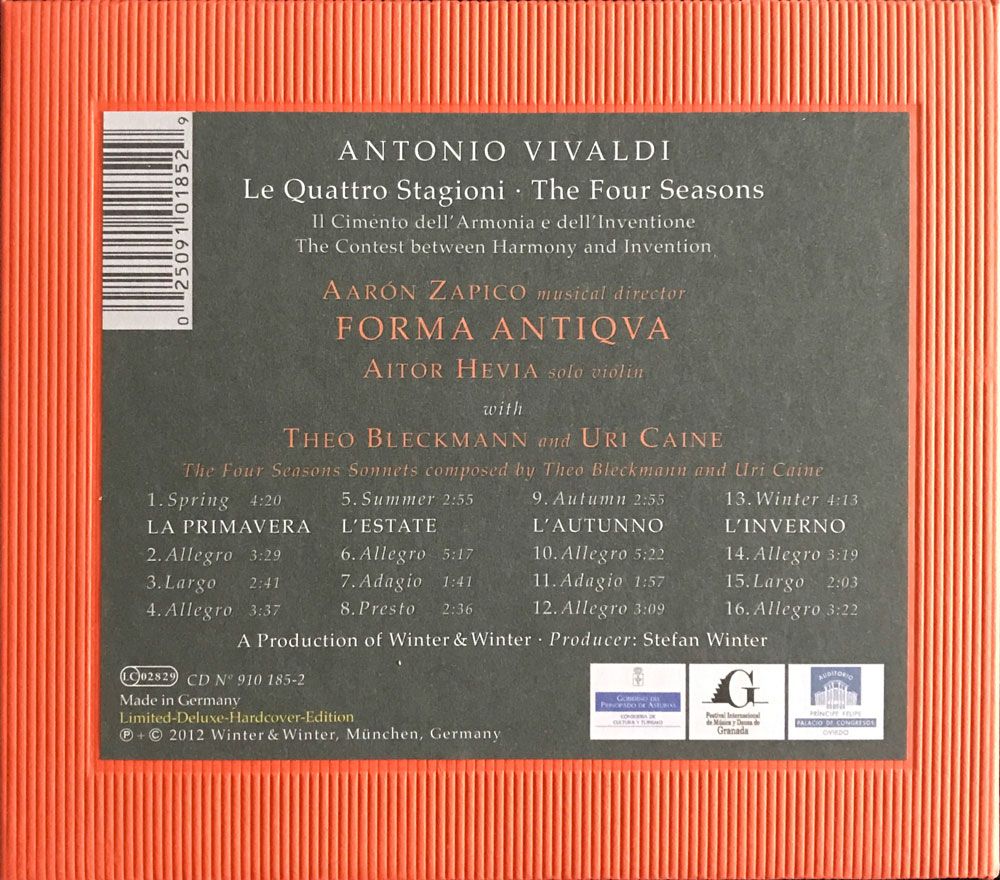 A wonderful audiofilm (cinema for closed eyes). An outstanding musical radio play. A musical homage to the world and the wonder of life — who besides Stefan Winter would dare to set Antonio Vivaldi’s sonnets to music for the very first time, to open with these four new songs the master piece «Le Quattro Stagioni». Since years Stefan Winter works as a sound artist, recording director and producer and he is known for ambitious and bold projects, now he surprises once again his audience with a creative new version of Antonio Vivaldis »The Four Seasons«.

The Spanish baroque ensemble Forma Antiqva under the musical direction of Aarón Zapico featuring the violinist Aitor Hevia create together with Theo Bleckmann and Uri Caine, and the visual artist Marcel van Eeden, a synthesis of the arts of this Baroque masterpiece.

Vivaldi’s sonnets are the starting point. These poems seem to be almost irrelevant short stories about sequences of events which happen during the seasons of the year. Vivaldi composes a baroque audio-film (cinema for closed eyes) about these sonnets and creates one of the most beautiful declarations of love for man and nature. His work of musical art tells a story about birds in springtime, rushing streams, dancing nymphs and shepherds, about searing heat in the summertime with dreadful and devastating hail storms, dance festivals with drunken farmers in the fall and brutal hunting until the very end, about the iciness in wintertime, a warm place in front of a cosy chimney fire and the warlike stormy northerly winds which blow across the land. Theo Bleckmann and Uri Caine set to music for the very first time Vivaldi’s poems in a translation adapted into modern English by Timothy Kotowich. Bleckman sings, is using electronic effects, works with samples and loops. Caine plays piano, keyboards and creates sound waves and rhythm patterns. Each song is made out of different elements. Wonderful piano parts can be heard for springtime, the summer is full of electronic sound cascades, the fall brings dance rhythms and the winter ice cold sounds. Bleckmann and Caine compose a «recitative» for »The Four Seasons« and freely interpret Vivaldi’s text. The poems and also parts of the harmonic structure were very likely penned by Vivaldi himself.

Beginning of the 18th century the original composition «Le Quattro Stagioni» is available in a published edition with the title «Il cimento dell’armonia e dell’inventione» («The contest beween harmony and invention»). This edition contains the twelve concerts Opus 8 which gain an international reputation under the name »The Four Seasons«. Even Johann Sebastian Bach gets inspired by Vivaldi’s works. But that is another story… These twelve parts can be seen as the components of a year. And always three parts build one concert, to be used as a model for spring, summer, autumn and winter. Vivaldi creates characteristic musical short stories
and writes program music. Vivaldi is a master of baroque sounds, rich in metaphors and at the same time comprehensible and professional. The sonnets are full of charm and sensuality and emotion, fear, life and death.

Aarón Zapico and his early music ensemble Forma Antiqa re-interpret in a unique and exciting way »The Four Seasons« and create rich sounds. Zapico and his musicians featuring the soloist Aitor Hevia perform like «actors» in a movie. Each musician embodies a special role. They have fun pretending to be a blooming meadow, a violent thunderstorm, the blazing sun, but also the dance which runs like a red thread through the whole story. Aitor Hevia plays the leading role, he mimics a bird, a farm boy, who is afraid about the storm which can ruin the harvest, he plays a deer which will be killed by the hunters, and he acts as an ice cold winterwind which is blowing over the frozen land. Stefan Winter is directing the production like a film director: «The musicians should melt into a new and personal style to be able to perform as actors. Stefan Winter finds with Aarón Zapico, Forma Antiqva and Aitor Hevia congenial partners. The focus is on Vivadi’s composition which has many different sides, sometimes the music appears surprisingly tough with powerful and brutal sounds, at the same time as having a gentle manner. With the simplest of means a complex imaginative space about love, death and life in the changing faces of nature is created. The story begins with the first sunbeam in spring time, who creates life, and ends with the icy, warlike apocalypse in the winter. The interpretation of Vivaldi’s text takes place today. Similar to a theater director who works on a play by William Shakespeare to bring it on stage in a new production, Aaròn Zapico and Stefan Winter find new interpretations and approaches for Vivaldi’s Four Seasons. Aarón Zapico, Forma Antiqva and Aitor Hevia link virtuosity with the will and power of expression. These «young and wild» musicians create something new which is above and beyond historical performance practice. The musician’s musical work resembles that of the Dutch painter and installation artist Marcel van Eeden, who made drawings for the cycle »The Four Seasons« which are far from the image of a deciduous tree in spring-, summer-, autumn- and wintertime.